Guided tours and visits in Florence

Among Italian language schools for foreigners, the Galilei Institute is unique in its exclusive specializing in one-to-one, personalized, full immersion courses specifically designed for professionals and students. Established in 1985, the Galilei Institute attained the highest prestige among language schools in Italy by providing its services to the leading companies of the world. Please take a moment to review our list of clients.

Among Italian language schools for foreigners, the Galilei Institute is unique in its exclusive specializing in one-to-one, personalized, full immersion courses specifically designed for professionals and students. Established in 1985, the Galilei Institute attained the highest prestige among language schools in Italy by providing its services to the leading companies of the world. Please take a moment to review our list of clients.

Location of the school 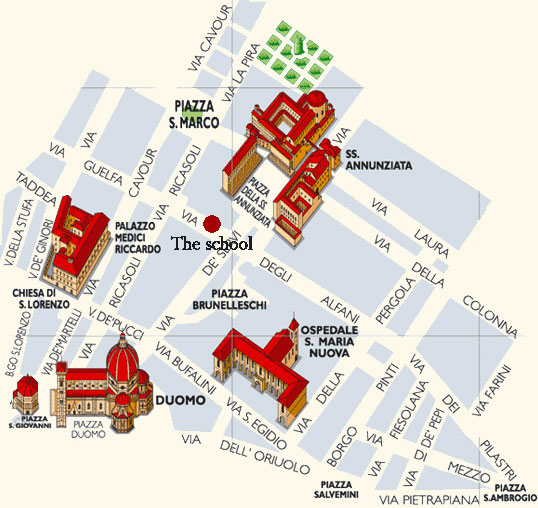 - visits to the museums and the churches

Our guided tours in Florence can be followed by anyone. No particular requirements nor enrollment in our Italian courses are requested to attend this program. All lessons can be taught in Italian or English.

This program of Florence guided tours and visits to the main museums, churches and palaces of the city is included at no additional cost in our four-week Art History course. You can participate in one or more of these visits even if you are not enrolled in the art history cours or any other course at the Galilei Insitute. The visits and guided tours in Florence can either be followed in the morning or in the afternoon and are recommended for anyone who is seeking stimulating and less standard information on the greatness of the Renaissance period.

Guided tours in Florence to the Church of Santa Croce, built in 1294. Probably designed by Arnolfo di Cambio, Santa Croce is considered the Pantheon of great Italians. In fact, Michelangelo, Galileo, Alfieri, Machiavelli, Foscolo, Rossini and many other famed geniuses are buried there.

The church can also be considered as an important Gothic gallery decorated by Giotto’s frescos and those by his best followers. The Renaissance sculptures by Donatello, Rossellino, Desiderio and others contribute to give the church an unique atmosphere.

Among our guided tours in Florence, one of the most requested is the one to the Accademia gallery.

On display at the Gallery are important paintings representing four centuries of the Tuscan school, including some works by Botticelli and Perugino. The Gallery is famous for housing some of Michelangelo’s most famous statues such as the unfinished St. Matthew, the Palestrina Pietà as well as the four “Prisoners” that the artist sculpted for the mausoleum of Pope Julius II.

The museum of the Accademia is famous worldwide for housing the statue of David, whose unsurpassed beauty has become the symbol of Florence. 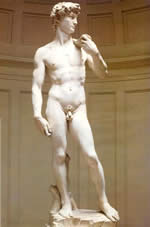 Guided tours in Florence to San Lorenzo church: rising over wide stairs, the original church was consecrated in 393. The church was rebuilt several times. The present church is considered the very first religious building in Renaissance style. The unmistakable genius of Brunelleschi is easily recognizable in the absolute pure proportions of the interior.

Inside the Church there are two Sacristies (Brunelleschi’s old one and Michelangelo’s new one) which represent the Medici’s mausoleums and are the best examples of architectural structures of the Renaissance period. Inside the New Sacristy by Michelangelo there are the statues of Night, Day, Dawn and Dusk. 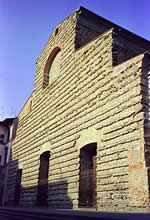 The perfection of Leon Battista Alberti’s geometrical façade of 1470 can easily mislead the visitor into believing it a Renaissance church. Santa Maria Novella is actually the most beautiful Gothic church in Florence. Started in 1246 by two religious architects, it was completed only one century later. The frescoes and paintings that decorate the inside and its chapels provide an exciting journey through the Florentine painting, starting from Cimabue 13th century until the 16th century mannerist painters, including Orcagna, Masaccio, Ghirlandaio and Filippino Lippi. People who search for guided tours in Florence usually appreciate a lot this guided visit.

Guided tours in Florence to the church of San Miniato al Monte, that is maybe the best example of Florentine Romanesque style, rising on the top of a hill with a beautiful view overlooking Florence. The architect took the inspiration for the white and green marble façade from the Baptistery. It was built during the 12th and 13th centuries on the location of a previous church. The interior is characterized by three naves with a presbytery raised above the crypt. Besides the large Byzantine mosaic and several Gothic frescoes on its walls, the church is famous for the chapel where a Portuguese cardinal was buried. In this chapel three great Renaissance artists, Pollaiolo, Rossellino and Della Robbia gathered together to create an atmosphere of unsurpassed beauty and harmony.

Guided tours in Florence to the Augustinian Church of Santo Spirito: the chucrch, as we see it now, is not exactly the same as Filippo Brunelleschi had designed it, since his followers modified the original project. Nonetheless, Santo Spirito is considered the most perfect example of a Renaissance church. Its inside is not only a combination of elegance and functionality, but it also hosts a great number of the Florentine Renaissance art masterpieces.

Guided tours in Florence to the Baptistery, dedicated to Saint John the Baptist, the patron saint of the city. It dates back to the 4th or 5th century, however it was remodeled considerably during the 11th and 12th centuries. This octagonal building is entirely covered by white and green marble panels in geometrical patterns. The interior walls are decorated by Byzantine mosaics made by 13th Florentine century artists. The Baptistery’s most famous works are three sets of bronze doors the most famous being the Gates of Paradise, by Lorenzo Ghiberti.

Among our guided tours in Florence, this is one of the most known and requested by the students.

It is not easy to abbreviate the history of this church whose works started in 1296 by Arnolfo di Cambio. Many artists worked on Santa Maria del Fiore, such as Giotto, Donatello, Paolo Uccello, Ghiberti and Luca Della Robbia. The church is especially important for the dome which probably is Brunelleschi’s most significant contribution to Renaissance architecture.

Even though the most important works of the Cathedral have been transferred to the adjacent “Museo dell’Opera del Duomo”, Santa Maria del Fiore remains a very important museum for its stained glass windows, its sculptures and decorations. 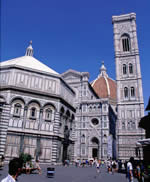 This Gothic church is not one of the best known churches in Florence. Much smaller than many others, is though worthy of a visit just to experience the harmony of its structure. The Sassetti Chapel is the jewel of the church. Domenico Ghirlandaio, the master of Michelangelo, decorated it with frescoes in which he reproduced stories of the life of St. Francis. Other artists, such as Luca Della Robbia and Lorenzo Monaco, contributed to enrich the Santa Trinità with important works of art. Among our guided tours in Florence, this one is less known, but not less interesting.

All art lovers wish to take guided tours in Florence at the Uffizi gallery at least one time in their life: very few museums in the world can offer such an Important and comprehensive review as the Uffizi. Starting with the first Byzantine masters like Cimabue and Duccio di Buoninsegna, the museum displays the chronological progress of the history of painting. Starting from the innovations of the masterpieces of Giotto’s and the Sienese masters, the International Gothic, represented by Gentile da Fabriano’s “Adoration”, to move on to the collection of Renaissance painting and its most representative artists (Masaccio, Paolo Uccello, Filippo Lippi, Piero della Francesca).

A special room is dedicated to Botticelli, whose paintings “The Birth of Venus” and “Primavera” are famous all over the world. The 16th century is represented by Michelangelo, Leonardo, Raphael, the Tuscan Mannerist painters (like Pontormo) and the Venetian school with the immortal works of Titian, Tintoretto and Veronese. 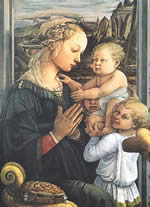 The austere medieval palace that housed the “Capitano di Giustizia” (a sort of medieval magistrate), is the seat of this museum. It is considered one of the most important museums in the world, above all for its Renaissance sculptures and decorative arts. In fact, the museum contains works by Michelangelo, Donatello, Luca della Robbia, Verrocchio, Pollaiolo and all the most important sculptures created by Florentines during the 15th and 16th centuries.

In addition, collections of coins, ivories, weapons and other decorative art objects can be seen in the ancient halls of the palace and addressed in our guided tours in Florence. 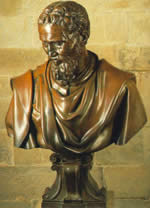 The Pitti Palace, largest and most monumental Florentine building, was the residence of the Grand Dukes of Tuscany and later, of the royal family when Florence became capital of Italy. The design of the Palace was probably taken from a model designed by the great architect Brunelleschi, and was originally commissioned in 1457 by a wealthy banker, Luca Pitti. When the Medici family bought it one century later, it was remodeled and enlarged by the architect Ammannati.

The Pitti Palace is important for housing six museums. One of these if the famous Galleria Palatina whose magnificent rooms frescoed by Pietro da Cortona are the setting for a beautiful collection of paintings by the greatest masters of 16th and 17th century. A visit to the gallery will take you from Raffaelo, Titian, Giorgione and Tintoretto to the Flemish artists such as Rubens and Van Dyck, ending with the genius of Caravaggio.

These guided tous in Florence are especially appreciated in the warmer season, a pleasant time to visit Boboli garden. 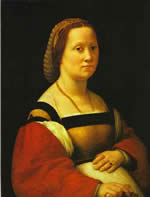 This program of guided tours in Florence is divided into 4 weeks in order to give a general insight to those who can only spend a few days with us and a more complete and in-depth knowledge to those who can attend for the whole month.

SCHEDULE OF THE GUIDED TOURS in florence

The schedule of the one-to-one, two-to-one tours as well as self-composed groups can l be established in agreement with the student/s.

BEGINNING DATES OF THE GUIDED TOURS AND VISITS

One-to-one, two-to-one and self-composed group tours can start on any day requested.The small group guided tours in Florence start on the dates listed below.

PRICES IN EUROS per person

Prices of the guided tours in Florence include museum entrance fees.

The secret of our quality is:

Excellent teachers with years of training and the school's size, which has been kept rather small in order to give everyone the opportunity to receive individual attention.

...or send a personalized question

Any cookies that may not be particularly necessary for the website to function and is used specifically to collect user personal data via analytics, ads, other embedded contents are termed as non-necessary cookies. It is mandatory to procure user consent prior to running these cookies on your website.